Pat Carson aka "Ed Flynn" is at it again!

Here are what the latest ads say. I've highlighted a few of the "this is Pat Carson" give way signs in red:

Need a break from city life?

"Back to nature in a setting of mostly unspoiled timberland our ranch has been in the family since 1887 . Over the years several family and friends have spent time here to decompress from the stresses of day to day life. If you can lend a hand from time to time we can Certainly put you up on the ranch . Our uncles after coming back from WW2 found the old home place a God send until they felt ready to get on with there life . But it was always nice to have a safe place to get your sanity back for them. If you are in need of such a place send us a phone number and we will talk . Located 50 km from Edmonton

We've also got this one:

Hey folks, it's time to walk the talk! The first picture you see, is of a three hundred year old spruce. We have been the guardians of this special place since 1887.
Tired of urban life and want to connect with nature
Interested in semi/off grid living? Love and respect nature, animals and the food you eat? Want to learn and apprentice for a trade?
We are located 50km northwest of Edmonton on a 160 acre homestead property that was established in 1887 by the Flynn family and proudly remains so by their descendants, even after these many years. The property is largely unspoiled boreal forest. On this property are horses, and 3 foals, should you wish to work with them or learn to ride, western A large garden, and entire property that has NEVER been treated with pesticides or chemicals at any time Large enough to plant anything we want, for own consumption/and or to sell surplus. Flora and fauna natural to the area, and some introduced by various members of the family over a period of 132 years. An arborist’s playground/study/practicum environment, a wonderland for mushroom hunters (oyster, toadstool, coral and many that I can’t name) There is game to be had during hunting season, if your meat source is important to you (deer, snow geese, ducks, A fully equipped machine/auto shop for the purpose of self-sufficiency, and in pursuit of hobbies. Should you be interested in learning and apprenticing in one of the following trades, (machinist, carpentry, heavy duty mechanic or welder) the opportunity exists here. Our goal is to develope off grid houses for those of us interested in making this our home. We also welcome trades persons who value clean living to make your home with us, on your days off. This opportunity is open to all between the ages 18 to 80, providing you are willing and able to contribute. Here you will learn the daily running of such a property, and help where help is needed according to your areas of expertise or interest. At the present time we have propagated wild indigenous plants for medical purposes
We are unable to accommodate smokers, or persons with substance abuse issues, as the safety, of our horses and all within the property are our priority. We are also uninterested in canabis farming, and we ask that individuals not use this add as an avenue for dating. (Not to say one couldn't meet someone here but it shouldn't be the primary reason for response to this add) (*note: If you talk to Pat, you'll notice he often finds a way to bring something sexual up in a judgmental, uncalled for and socially awkward way. What legitimate association would put this in their recruiting "add"? You'll also note the spelling and grammar errors galore- another telltale sign of the notorious Pat Carson, sex offender)
Those interested may contact us (*nope, no "us", just Pat Carson, scary sex offender) to arrange an extended visit, which will help you to determine if this lifestyle is for you. Should you find that you want to make your home here, financial contribution towards the grocery bill is appreciated, or can be negotiated on an individual basis. Please be advised that there are sacred historical sites that have been used by the indegenous people of North America, for thousands of years. We have no intention of exploiting these areas for economic benefit.
--------------------------------------------------

Posted by concerned at 8:46 PM 5 comments: Links to this post

These are not concrete clues but we have indeed found some patterns that can help people avoid ending up at Pat Carson's. As always, use your own best judgement.

Do NOT go somewhere alone or in the middle of the night. Bring a friend or two and get their opinion.

Do NOT travel here on your last dime with no way to return! This sadly has happened to a number of people, read the comments .

Pat Carson gives his place as a set of coordinates or geographical directions. Search Google maps and see if it is in Onoway, Alberta or near Sandy Beach. This is where Pat Carson lives and lures people out to. Google the address or call the Morinville RCMP and confirm if the address is for Pat Carson.

1) No phone number given

If you are dealing with a legitimate ranch owner inviting you out for a visit or for paid work or room and board, they should have a phone number. Google that phone number. Call the police in the area and check whose phone number it is.

Pat Carson does not give out his phone number as every time he does, we get it and post it here. That said, if you have Pat Carson's new number, please let us know so we can post it as well :)

If you are responding to an ad and they won't give you a number but instead ask for yours so they can call you.......it's probably Pat.

IF he gives you a name (he uses many aliases, the latest is "Bill O'Brian") Google the name.

Not sure why this is, but this is frequently the case. If you read the ad and it seems "off" and not like an ad that a healthy, friendly, modern human being that interacts with other humans would write.... I mean, it's probably Pat. Or Richard, his helper.

Or if they do, it is obvious it is new and not interacted with for years back. There are no well written, quality posts. Or it looks really substandard and strange. Reverse image search any pictures that appear there.

There are some legitimate ranches in the Onoway area and you can tell by their Facebook page, which has quality posts, pictures and reviews left by multiple people spanning back for years.

Many people, myself included, ended up getting involved with Pat despite alarms bells ringing in my head. "Don't judge", you may think. Stop jumping to conclusions, we tell ourselves.

There is something inside all humans that responds this way to a predator. Learn to listen to your intuition.

He has a way of skirting around answering questions. Be aware of this.

If he gives you a number, it may be for a local business. Check the number.

5) No dogs are allowed

Good luck finding a functioning ranch with other animals, in Alberta, where no dogs are allowed. It seems Pat is the only one!

We suspect there is a terrifying, sorrowful and chilling reason why Pat does not want dogs sniffing around his property.
Posted by concerned at 12:16 PM No comments: Links to this post

His latest alias is "Ed Flynn" but he could be going as anything and changing from time to time. He stopped giving out his phone number as we'd always find it and post it here to warn people who were googling the number.

If you are talking to someone who won't give you a phone number (insists you give yours so they can call YOU from a blocked number), doesn't have a proper website, obviously please proceed with caution.

The ranch is near Sandy Beach or Onoway Alberta.

His ads are on Kijiji  and talk about offering room and board in exchange for work.

He is a scary, scary person. Go out there at your own risk.

There are other ranches in Alberta that are UNRELATED. Just do your research. It should be obvious which ones are legitimate and which ones are sketchy Pat Carson trying to lure you out into the middle of nowhere, referring to himself as "we" only to get there and realize it's just you and him (!!!)

Please continue to send us information on his activities so we can post here and warn others. Please spread the word all around the internet to keep more people safe. Thank you!
Posted by concerned at 10:20 PM 14 comments: Links to this post 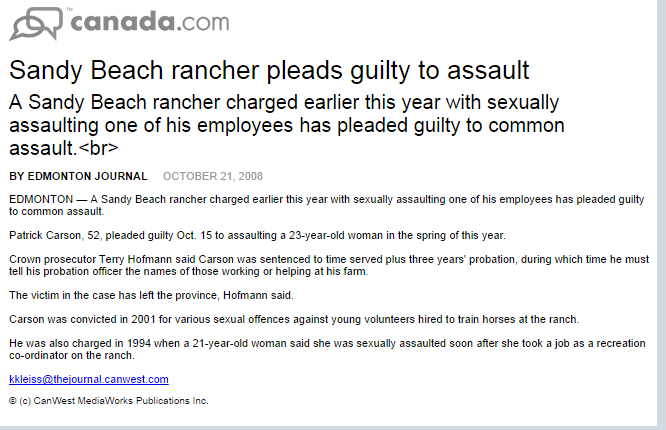 Posted by concerned at 10:42 PM No comments: Links to this post

The ranch is now going by a new name, which we saw coming. It is now being referred to as Heffernan Heritage Homestead. Please keep in mind that he keeps changing the name.
It could be anything! If you know the newest name, please let us know!

We can only hope that people find info on Pat before heading out there such       as comments building on this site, letters from members of parliament (referenced at the end of this post)
and RCMP press releases.

"Patrick Joseph Anthony Carson, 46, is an untreated sex offender released from jail and is labelled a predator who engages in extensive planning to secure his victims. He was sentenced last year to 18 months for sexually exploiting three girls under the age of 18 outside of Edmonton. He had a previous five year sentence for picking up underage prostitutes and choking them. He will be out on the streets in six months and we do not where. We do not know what name he will use. We do not know anything about it." Source: http://openparliament.ca/debates/2003/4/1/randy-white-2/only/
Posted by concerned at 9:08 AM 2 comments: Links to this post

"Patrick Joseph Anthony Carson, 46, is an untreated sex offender released from jail and is labelled a predator who engages in extensive planning to secure his victims. He was sentenced last year to 18 months for sexually exploiting three girls under the age of 18 outside of Edmonton. He had a previous five year sentence for picking up underage prostitutes and choking them. He will be out on the streets in six months and we do not where. We do not know what name he will use. We do not know anything about it."

-Randy White on Sex Offender Information Registration Act.
Source:http://openparliament.ca/debates/2003/4/1/randy-white-2/only/
Posted by concerned at 3:43 AM 1 comment: Links to this post